For the 22nd year, the Indiana Sportswriters and Sportscasters Association is pleased to announce its annual Hall of Fame Class.

This year’s class includes the following personalities who have graced Hoosier newspapers, radio stations, and television airwaves over the past several decades. The inductees are as follows:

Bill Benner, reporter/columnist Indianapolis Star & News _ Bill spent over 30 years writing for the Star & News, covering the Pacers, the Hoosiers, and eventually the Colts. Bill became a columnist in 1990, remaining in that role through 2001. Bill also covered Final Fours, Olympic Games and any major sporting event to grace the Circle City. These days, Bill is a senior vice president with Pacers Sports & Entertainment.

Jim Brunner, WBAT/WMRI Marion _ Jim has been broadcasting seemingly every sporting event in Grant County since 1971. Jim has broadcast high school state championships, including the last seven Marion Giants’ basketball state titles. He’s also been on the call of NAIA national championship games for Indiana Wesleyan. In addition to his play-by-play work, he’s the host of “In The Press Box” on 860 ESPN (WMRI) in Marion.

Dan Egierski, WEOA Evansville _ Dan has been a part of the sports scene in Southwestern Indiana for more than 30 years. Dan was the ISSA Sportscaster of the Year in 2010, and he is a member of three different sports halls of fame in the Evansville area. Dan hosts a daily show currently on WEOA in Evansville, in addition to serving as the play-by-play voice of Evansville area high school sports.

Arv Koontz, Seymour Tribune _ Arv has been documenting all things Jackson County sports since 1972, and for all but six of those years at the Seymour Tribune. Arv was named the ISSA’s Corky Lamm Sportswriter of the Year in 1999. By Arv’s count, he has covered more than 1,500 Indiana high school basketball games, a number he is building on to this day, despite retiring from full-time sports writing in 2009.

Bob Simmers (deceased), WITZ Jasper _ Bob Simmers came to WITZ as an engineer and left as the voice of the Wildcats. Prior to his days in Jasper, Bob worked in his hometown of Sullivan after spending time in the Navy. Bob received the IHSAA’s Distinguished Media Service Award in 1987. He also served as a mentor for another member of the ISSA Hall of Fame in Walt Ferber. Bob passed away in 2006.

Marv Bates Sportscaster of the Year: Chuck Freeby WHME South Bend _ Chuck began his television career in South Bend at WNDU, where he worked for 17 years before making the move to WHME. At WHME, Chuck handles the play-by-play for the area high school game of the week. In addition to that, Chuck is radio voice of Notre Dame baseball and handles various other small college play-by-play as well.

Ron Lemasters Lifetime Achievement Award: Rex Kirts, Bloomington Herald-Times _ Rex spent more than 40 years chronicling primarily high school sports for the Bloomington Courier-Tribune and Bloomington Herald-Times. Rex also assisted on coverage of Indiana University sports, plus auto racing, including a great passion for the Indy 500. Rex is a member of the ISSA Hall of Fame, and is a four-time winner of the Indiana Sportswriter of the Year. The annual media award given out by the Indiana Football Coaches’ Association is named in his honor.

Bob Williams Helping Hand Award: Terry Downham _ Terry has been assisting those covering high school sports in Kokomo for more than 40 years. Terry serves as the sports information director for Kokomo High School, and he’s also the public address voice of the ’Kats. He’s also been a part of the game-day stats crew for the Colts, since they moved to Indy in 1984, and he has been a part of the Purdue game-day crew for 25 years. Terry even assisted Bob Williams in game-day operations for the IHSAA football state finals at the RCA Dome.

To become an ISSA member, or to renew your membership, please send a check for $20 (annual dues) to Inniger. Or you may join on the day of the banquet.

The Indiana Sportswriters and Sportscasters Association was founded in 1946. It created its Hall of Fame 50 years later in 1996. The Hall of Fame currently has 105 members. 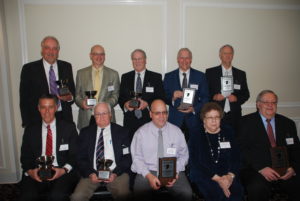